Kurt Dufour grew up in a world of wealth and privilege. Adulthood hits him hard when at the age of nineteen he’s accused of murder. Just when he thinks his reputation is permanently smeared by the accusation and trial, he receives a second chance. He joins Otto Warner’s American cycling team. Five years later he’s competing in the Tour de France against five-time champion, Jacques Poulain. Can Kurt overcome the obstacles and win?

Professional sports have a way of igniting passion in fans and competitors. David Chauner’s cycling novel may be about a sport that isn’t as popular in America as baseball or football, but his novel brings the intensity, passion, and drama of the Tour de France to life. Yet, one doesn’t have to know much about cycling or the race to enjoy this story. And if you are a cycling fan this book is perfect for you.

Chauner doesn’t just highlight the drama of the cyclists as they compete in one of the most intense and rigorous sporting events. He takes the reader behind the scenes, showing the good, the bad, and the downright ugly aspects of the sport. It’s not much of a secret that when money and fame are involved, some will go to great lengths to succeed no matter the cost. However, the twists and turns in High Road take some unexpected routes. This isn’t just about cycling. It has love, murder, intrigue, revenge, and scandal.

Chauner, a former cyclist and sports writer, has a wonderful way of describing what it feels like to compete in the Tour de France. His passion for the sport shines and is infectious. At times it’s almost as if one isn’t just reading the words on the page, but is actually on a bike, pedaling like mad, gasping for air, and pushing oneself past physical and mental exhaustion to make it to the finish line. These pages fly by and leave the reader breathless.

It’s hard not to get swept away by the suspense of the actual race. This helps the author take the reader by surprise at times. The mystery elements ebb and flow in the story, causing one to forget about crucial episodes and characters. When they resurface it’s like getting hit over the head.

High Road is filled with excitement for all readers, not just cycling enthusiasts. The author has done an excellent job of creating a story that encompasses elements that keep the reader engaged and on the edge of their seats. It’s not solely a sports novel. It’s a story about a young man who wants to shed his past and not be defined by an incident he had no control over. Many readers can relate to the human aspect of the novel. Sports fans will love the passion and drama. This is the author’s first novel and I have a feeling it won’t be his last. And readers don’t be surprised if you start following the Tour de France this summer.”  Self-Publishing Review, 4.5 stars

“I first met Dave Chauner when he was a successful racing cyclist, exactly 40 years ago. Then again when, as a commentator for the American networks, I found he had moved his talents to organizing America’s top bicycle race in Philadelphia. Now, our paths have crossed again and High Road is likely to become a best seller – another side of a very talented person. You don’t need to be a cyclist to enjoy this book. I could not put it down, and neither did I work out the ending. This is a brilliant read, although Phil Sterling did seem to come very near to home!”  Phil Liggett, mbe. London.

High Road delivers a cycling tale with plenty of drama and tension. It’s a realistic look at the Tour de France from all angles and explores many of the crazy decisions that need to be made during the toughest cycling race on earth. It brings to life the gritty world of cycling while capturing the essence of the sport that many of us love.
~ Frankie Andreu, nine-time Tour de France finisher.

Reads like a real thriller and what you would expect from an ex-bike racer who knows the sport.
~ John Wilcockson, cycling journalist, author and editor

This book FAR exceeded my expectations. I expected a cycling geek book with an obvious plot and superficial characters – completely the opposite! I cared about the protagonist, few plot twists were what I expected, and I really couldn’t put the book down. I particularly liked an episode that resolved what could have been a clichéd sports story situation with a clever change in point of view. There was also a possible setup for a sequel – I’ll buy it!    Jim Mueller, Oklahoma

Now here is a story about the world of professional cycling that you don’t have to be in the industry – or even a fan of – to enjoy. Chauner has penned a dramatic pager-turner of a tale that just happens to be set against the backdrop of pro cycling. There is drama, skulduggery and romance. And, if you do follow the sport, characters you will surely recognize. If you are a cyclist, this is a must read. If you’ve a partner who, by the second week in July, will be fed up with your annual obsession over La Grande Boucle, this is the book to give them…just before the July 4, 2015 start.

I just finished High Road and I loved it.  I learned so much about the inner stuff of bike racing, especially the Tour de France–including the training, stress, discipline, competition (before, during, and after the race), and the ugly stuff of drugs, money, etc.  I loved the suspense that was created–right up to the end (wondering if Kurt would give in to the bad guys), and the surprise ending.  I read a lot, and I thought this was so well written.  Bravo!  Ann R, N. Carolina

Just finished reading your fine novel, “High Road” and it is amazing. I literally could not put it down. I will have more to say soon, but having known you as far back as 1973 when were teammates and how much you have contributed to the sport of Cycling over the years……This novel could turn out (because of it’s broader appeal) to be your biggest contribution ever.

∼ Bike Guy……author of The Jersey Project

Finished! Spoiler alert: Author needed the producer girl to reappear at the end ;)  A really great read!  I feel a movie screenplay???? 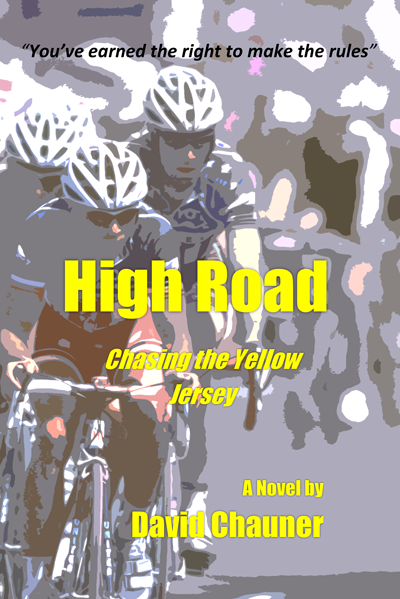