David Chauner is a two-time Olympic cyclist who turned his passion for the sport into a life career. His cycling career spans nearly forty years as an Olympic and international competitor, writer, national television and radio color commentator, international event producer and now developer of a new World Cycling League.

Chauner grew up on Philadelphia’s Main Line where he first developed a passion for cycling as junior member (12 and under) of the Main Line Milers, a local cycling club started by his older brother and some friends. He discovered racing in the mid-sixties and soon joined the prestigious Century Road Club of America, one of the oldest racing clubs in the U.S.

Cycling as a lifelong focus began after qualifying for the 1967 Pan American Games in Winnipeg, Canada. That was followed by berths on the 1968 and 1972 Olympic teams, six national championship medals and racing competitions that took him to Belgium, Canada, Colombia, France, Great Britain, Holland, Italy, Luxembourg, Mexico and throughout the United States. He capped his racing career in 1975 by winning the final stage of the twelve day Tour of Britain which, at the time, was one of the world’s most prestigious amateur stage races for national teams.

He attended Washington University in St. Louis, Villanova and Upsala College where he graduated with a degree in Psychology. He also served in the military and competed for the U.S. Army Cycling Team during 1971 and 1972.

After retiring from competition, he became one of the founding directors of the Trexlertown Velodrome in Pennsylvania and, from 1976 through 1978, developed innovative programs that helped establish “T-Town” as one of the best outdoor velodromes in the world.

Over the past 30 years Chauner, in association with various business partners, created the first ever U.S. National Professional Road Championship and ran most of the nation’s top international road races held in major cities including Atlanta, Baltimore, Minneapolis, New York, Philadelphia, Pittsburgh and San Francisco. Most notable have been the Million Dollar Triple Crown, The San Francisco Grand Prix and the Philadelphia International Cycling Championship known for its iconic Manayunk Wall.

He is currently the CEO of World Cycling League, an innovative new business designed to develop track cycling as an entertaining made-for-television league sport.

Chauner’s writing career began in the seventies while he was still racing, primarily as a journalist writing race reports and features for the little known cycling tabloids at the time. By the early eighties he became more involved in announcing, television commentary and freelance writing.

He was the founding editor of Winning Magazine, a Belgium-based cycling publication and was hired by CBS as an on-camera analyst for the network’s first coverage of the Tour de France in 1983. Also during that period his freelance articles appeared in the New York Times, Sports Illustrated and in many U.S. cycling publications. In 1990 he co-authored The Tour de France Complete Book of Cycling (Villard Books).

In 1998, he was inducted into the U.S. Bicycling Hall of Fame for his many contributions to the sport.

Chauner began writing High Road, his first novel, in 1995 well before cycling’s doping scandals became mainstream news. The book was modified and finished in recent years to reflect many of the challenges faced by today’s cyclists, officials and team managers as seen through the eyes of fictional characters and plausible events. He is currently working on the sequel to High Road. 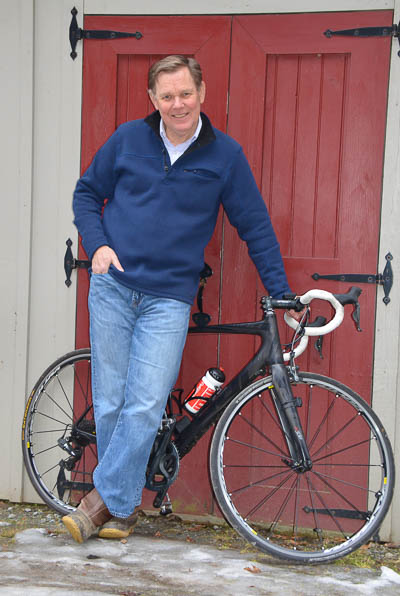 My life changed on Christmas morning, 1962 when I tumbled down the stairs to discover my dream present propped beside the Christmas tree: A bright red Raleigh Lenton Grand Prix 8 speed racing bike.

Little did I know then that my first dropped handlebar racer was the beginning of a life that would revolve around cycling as a sport, a business, a passionate avocation and, above all, an education… about people, places and things that I may never have witnessed any other way.

The sport brought out the writer in me. As a sideline to more gainful pursuits, I have always enjoyed freelance opportunities to comment on my favorite subject.

And now, as a 20 year bucket list project, I’ve finished my first novel. I hope it conveys some of what can and does happen inside this colorful, bizarre and charismatic sport.